Camper/RV as a bug-out option

In 2006, just a few days before my birthday I bought an old Volkswagen Transporter T3, camping edition. I had it for 7 years and finally sold in may 2013. I spent so much fun time with the van, but in the end I was glad I sold it.

My VW was manufactured in 1979 (it was the year the third generation of Transporter, sold in Europe as Transporter/Caravelle and in America as Vanagon) and fitted with all kinds of camping equipment. It had a foldable bed, a pretty good refrigerator (that worked on both 12V and 230V power, as well as propane gas), a two-burner stove to cook on, a sink, a small tank for clean water, a table, and a lot of cupboards. Oh, and a small pop-up roof that allowed me to stand upright when I was cooking, improved the ventillation, but had no other benefits.

It had enough space for 2 adults to sleep, but I was able to use it with my girlfriend and my 3 y.o. son as well. It wasn’t equipped with a toilet and shower, but that didn’t force me to use it only on campsites/campgrounds. 😉 I spent some time using it on my piece of land I now consider my main bug-out location. 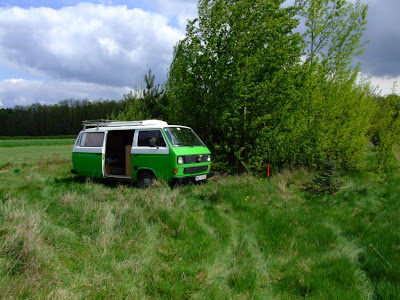 As I commented some time ago on Ferfal’s blog, I believe that buying a camper van, motorhome, RV (recreational vehicle) or a camper trailer for the sole purpose of bugging out when needed is a dumb idea.

But it sure is an interesting option to consider.

Camping in a well equipped motorhome or camper trailer can be a lot of fun. It sure is less comfortable than sleeping in a hotel, but gives you much more freedom to go wherever you want. In some countries you can park the van anywhere, and stay in the spot for a couple of days — for as long as you have clean water and space in the wastewater tank.

I recall a trip to Masurian Lake District in Poland and to Lithuania with a friends of mine, when we slept only 3 of 8 nights on campsites. It might be even more fun if we had a chemical toilet or a shower in my camper van.

Camper van or camper trailer as a bug-out vehicle

Let’s focus on the more important matter — which features of a camper van or trailer are useful when bugging out?

It depends on your bug-out strategy.

If you already have set up a bug-out location (BOL), equipped with energy and heat source, then in most cases you only need to get there as soon as possible. All-terrain capabilities might be useful as well. Long range, good fuel efficiency — also.

In this case, the camper van/motorhome is not a good choice. It’s probably slow, uses a lot of fuel, isn’t able to drive off road.

Camper trailer will be as useful as the car/van/truck that’s towing it. But towing a trailer also decreases fuel efficiency, maximum speed, makes driving off-road a lot more difficult (if possible).

But there’s another option.

If you don’t have a BOL set up at the moment, but only have a plot of land somewhere (or even don’t have that), then camper trailer or camper van makes a lot more sense.

This is exactly the way I used mine — I went to spend some time on my future BOL, slept there, did some construction stuff, etc. If I had to evacuate from my city at that moment, I would take the RV and simply drive to my place in the sticks, and stay there for as long as possible.

Which wouldn’t be very long, as it had no other heating except for the van’s engine. But motorhomes are equipped with gas heating, water tanks, water heaters, showers and toilets. So if you only provide enough fuel for heating (and storing propane is pretty easy, but not cheap) and water, than you’re good to go.

Camper van / trailer as a BOL in the city

Camper van or camper trailer would be very useful if you were forced to leave your house/apartment for some time, but didn’t want to go far. If your house burns down to the ground, you would still have to go to work every day, so living in a camper might be a good idea.

A friend of mine spent 9 months living in a pretty comfortable motorhome. For some time I also considered it a good alternative to living in a small flat in the city — with more freedom, but less space and less costs.

And the answer is…?

Personally, I would only choose a camper van or a camper trailer as a bug-out solution, if:

In any other case, I would advise against it.